Volcano’s Lavatube is one of the most hyped electronic cigarette products I have ever seen. If you have noticed a bit of sameness in the electronic cigarette industry, don’t be surprised.            Essentially, what every merchant does is simply choose one of the several different Chinese designs, put their logo on it and re-sell it in the United States. The difference is in the specific items a kit includes, the e-liquid flavors available, the price, and the customer service the merchant provides. The Lavatube may be the beginning of a new direction. According to Volcano, the Lavatube is an original design and will not be available in the United States from any other merchant. Merchants outside the US will also be allowed to sell the Lavatube, but not under the same name.

The Lavatube produces more vapor with more flavor than any electronic I have tried to date. There is a bit of a learning curve associated with vaping at six volts, so if you have never used an electronic cigarette before you may want to try a simpler product such as the Halo G6 or Volcano Inferno before moving up to the Lavatube. For any experienced vaper who has ever wished for more power and vapor production, though, the Lavatube is the product to buy.

The Lavatube starter kit costs $99.99 and is as much as $150.00 less than other 6-volt variable-voltage e-cigs and mods. With it, you get the following: 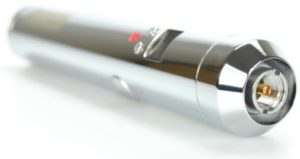 Volcano has made significant efforts to make the Lavatube a real consumer product. When I look at other 5- and 6-volt e-cigs, I see warnings about choosing the correct battery to avoid damage to myself or the product. Other manufacturers expect you to change the battery to run the unit at a different voltage and remember to select an atomizer with the correct resistance for the battery. I don’t want to bother with any of that. The Lavatube is the first variable voltage e-cig for those of us who want something that just works.

The Lavatube includes the following features.

Upon taking the Lavatube out of its packaging, my first impression was that it seems to be an extremely well-built product with close attention to fit and finish. The body is made from hard aluminum, and the threading for the atomizer and battery cover feels very solid. There appears to be no possibility of e-liquid leaking through the atomizer terminal and into the battery casing. The buttons are tight and emit a satisfying click when pressed. The display is bright and easy to read.

The included charger has terminals for two batteries. The battery for the Lavatube an 18650 is a lithium ion battery with a total capacity of 1600 mAh, significantly more than the 1000 mAh Inferno Super Battery. In practice, I find that I can use the Lavatube for about two days at any voltage level before I need to recharge the battery. You can press the power button seven times quickly to see the current charge level; the battery is full when the screen displays 4.2 and nearly empty when it displays 3.3.

The Lavatube has a booster that allows the battery to reach its maximum output of 6.0 volts. I find that when the current voltage level gets down to around 3.5, the booster can no longer get the output quite up to the maximum, and it’s time for a recharge. Out of the box, the Lavatube battery arrives with a partial charge. Bringing it up to full requires a little over three hours, and charging it to full after being completely drained requires about six hours.

The Lavatube e-cig uses a standard atomizer threading that works with all of the most common atomizers and cartomizers. It works with everything Volcano carries as well as 510 and 306 atomizers purchased from other companies. The only thing you won’t be able to use with it is an Inferno Tank-o-Mizer; the shape isn’t compatible. Even with an adapter that raises the battery threading, I was unable to get my Tank-o-Mizer to work. If you prefer pre-filled cartomizers, the Lavatube allows you to dial up the voltage and coax more vapor and flavor out of them, something that isn’t possible with a standard e-cig.

Before the Lavatube, I had never experienced vaping at six volts with a high-resistance atomizer. Volcano’s Lavatube atomizer is rated at three ohms, giving you 12 watts of power at six volts. In contrast, Volcanos Inferno e-cig has a 3.7-volt battery. When combined with the 1.5 ohm Lava atomizer, the Inferno delivers 9.12 watts.

When using the Lavatube, it was as though I was tasting my favorite e-liquid Volcano Menthol Burst for the first time. The vapor was relatively fresh, but the flavor was richer and more evident than ever. I also felt more of Menthol Burst’s characteristic cool menthol rush than ever before, and this was with a 510 atomizer, which I generally do not prefer. Switching to a high-resistance 306 atomizer was like nirvana. Suddenly, every other electronic cigarette I had ever tried seemed incredibly inferior.

I also had a lot of fun trying Volcanos Mega Clearomizer with the Lavatube. I was able to take the 2.5-ohm Clearomizer all the way up to 6.0 volts without engaging the Lavatubes voltage limiting feature. Although dripping will probably always be my preferred method of using electronic cigarettes, cartomizers have never produced such great tasting vapor as the Clearomizer does with the Lavatube. If you are a cartomizer user, you just have to be careful. The Lavatube consumes e-liquid much more quickly than you might be accustomed to with 3.7-volt batteries. You must remember to keep the cartomizer very wet to avoid getting a burned taste. When I tested the G6 with a Clearomizer, I lowered the power to 5.0 volts to help prevent it from using e-liquid too quickly.

Volcano charges a very reasonable $11.99 for extra Lavatube batteries, a great price when you consider that Inferno batteries cost $19.99 each. At that price, I highly recommend adding a spare battery to your order when you buy the one of the best e-cigs Lavatube. Charging a dead battery takes several hours, and you will not want to have to use something else while you wait for the battery to charge.